Every copy of the book published in London at the end of 1623 as Mr. William Shakespeares Comedies, Histories, & Tragedies is unique. We tend to assume that the printing press produced identical copies, but in fact, early modern printing practices meant that books of the period comprised different combinations of corrected and uncorrected sheets. Most books were sold unbound in order for purchasers to customise them to their own requirements. And standard accounts of reading in this period described it as an activity undertaken with a pen. Writing in books, sometimes engaging directly with their content but equally often simply using up blank paper, was standard. The book we now know as the First Folio is no exception, and copies carry clues, from doodles to lost pages and from inscriptions to bindings, that bear witness to the circumstances of their production and reception.

The Munro copy that is reproduced on this website is a fine example of this book in an early nineteenth-century rebinding. Shakespeare’s high cultural status in the age of empire really transformed the First Folio into an iconic object. As Darwinism chipped away at biblical authority, the Victorians invested another big old book with meaning and value, substituting the First Folio as a kind of secular scripture. At the same time, booksellers worked to repair and revive copies that often showed considerable signs of wear and tear. The Munro Folio shows some of this work. It has replacement facsimile leaves – for the titlepage (although the portrait itself is an original) and for Ben Jonson’s famous eulogy in which he predicts that Shakespeare is ‘not of an age but for all time’, and a couple of pages at the end of the final play in the volume, Cymbeline. It also has a beautifully executed ink facsimile repair to one of the margins of this play. The skill with which damaged paper has been replaced and the lines of type provided in perfect hand-inked characters is remarkable: only by holding the page up to the light can we see the join. It’s a testimony to the value of the book in the period.

Some booksellers were experts in this kind of repair – known in the trade as ‘vampment’ – producing old books that were as good as new. In the process, of course, evidence of previous owners and marks of their use were often destroyed. But the Munro copy retains some details of its own biography. Firstly, there are a number of names and initials written at different points in the book, attesting to owners and readers over a couple of centuries. One seventeenth-century hand identifies ‘Ann Bruce’ written neatly in the gap around the title The Tempest – a surprising number of Shakespeare First Folios are marked by early women readers suggesting that it had a particular resonance for them (and one thing I’ve noticed is that early readers are more likely to sign their name deep in the book’s pages than on the title or preliminary pages). There are also numerous initials, some with a curly pomposity that may suggest a young person practising a grown-up signature. The inscription at the bottom of one of the history plays, ‘James Graham with his hand’ also looks as if it might represent an immature reader. We know that the copy was owned by the Bruce family and sold in the early nineteenth century to the Munros, Baronets of Lindertis (the 4th Baronet was also a keen mountaineer and gave the family name to his list of Scottish mountains over 3000ft). 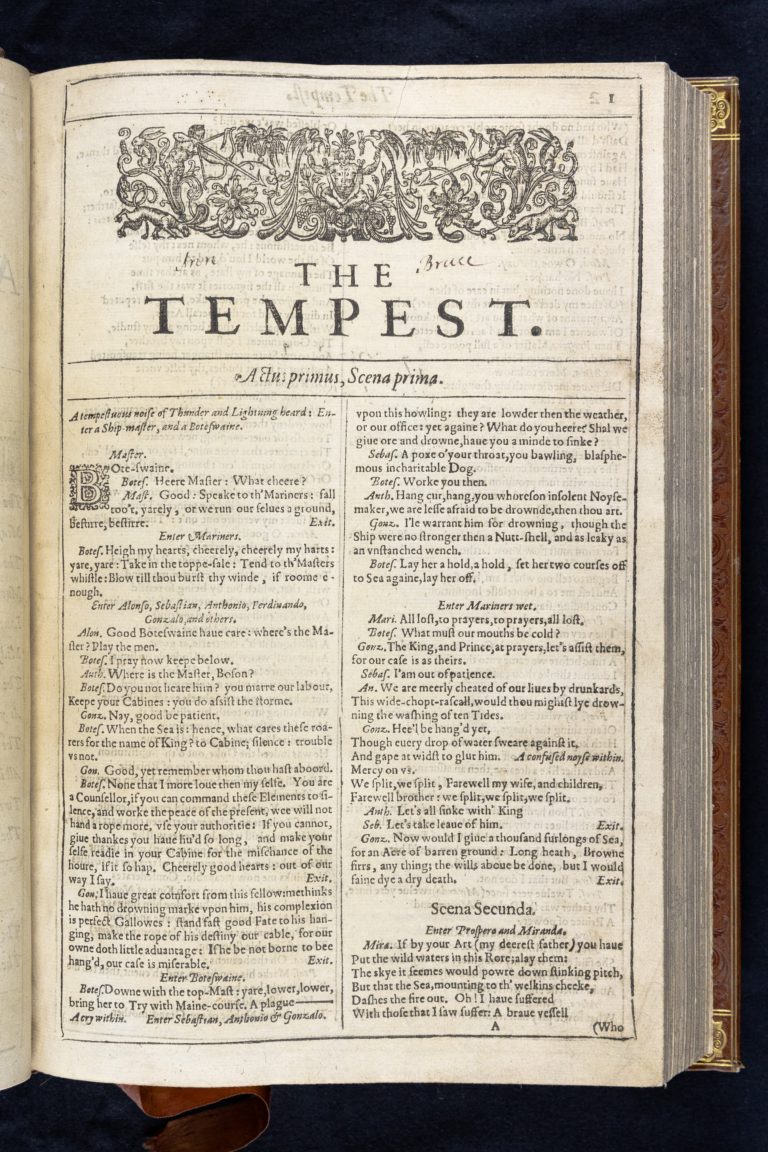 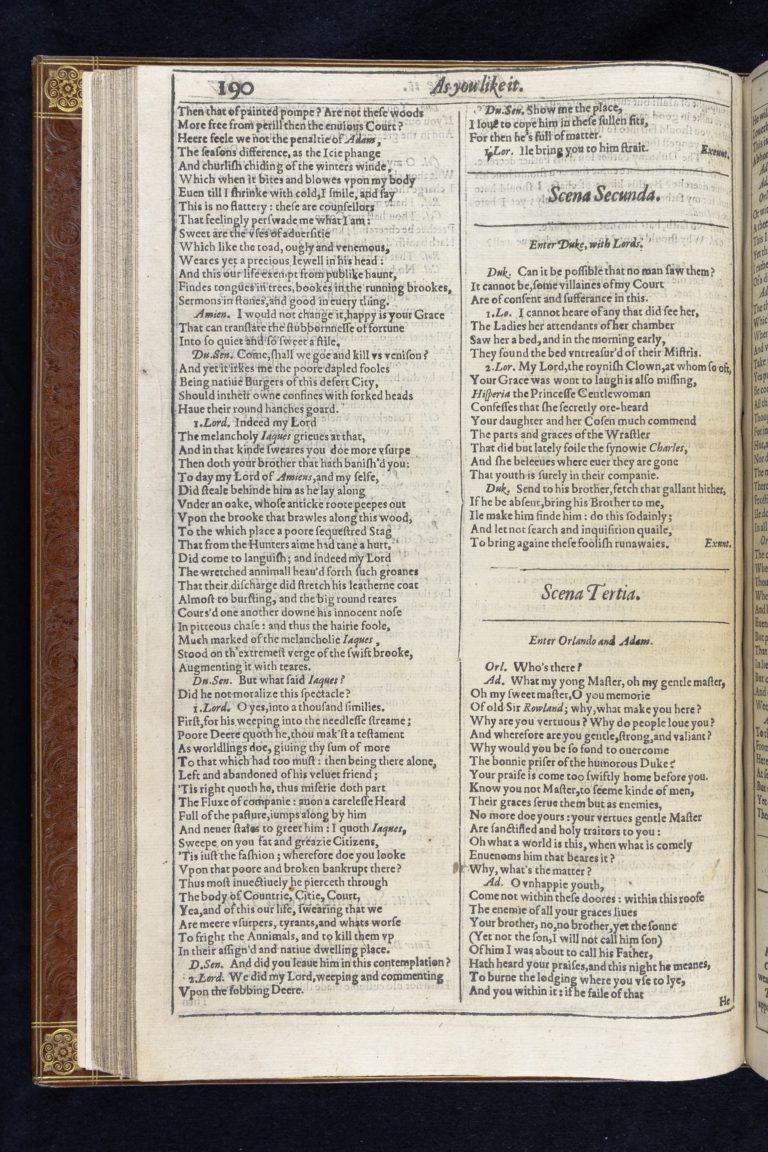 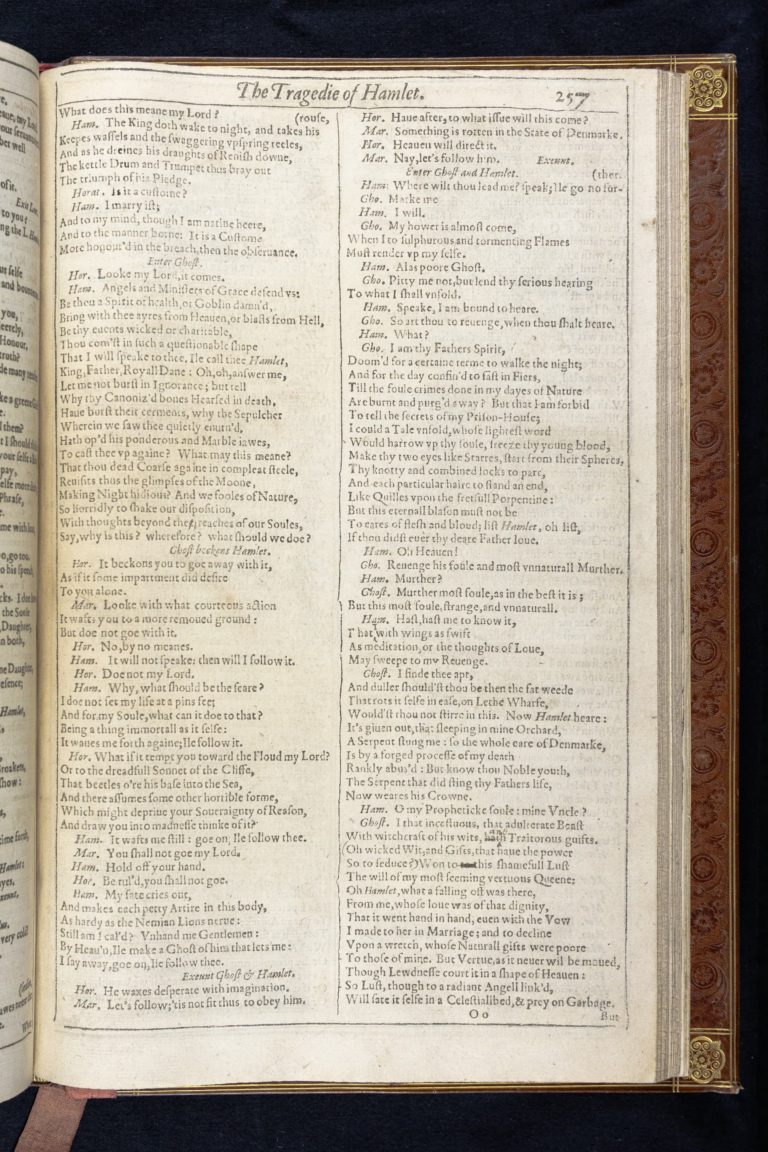 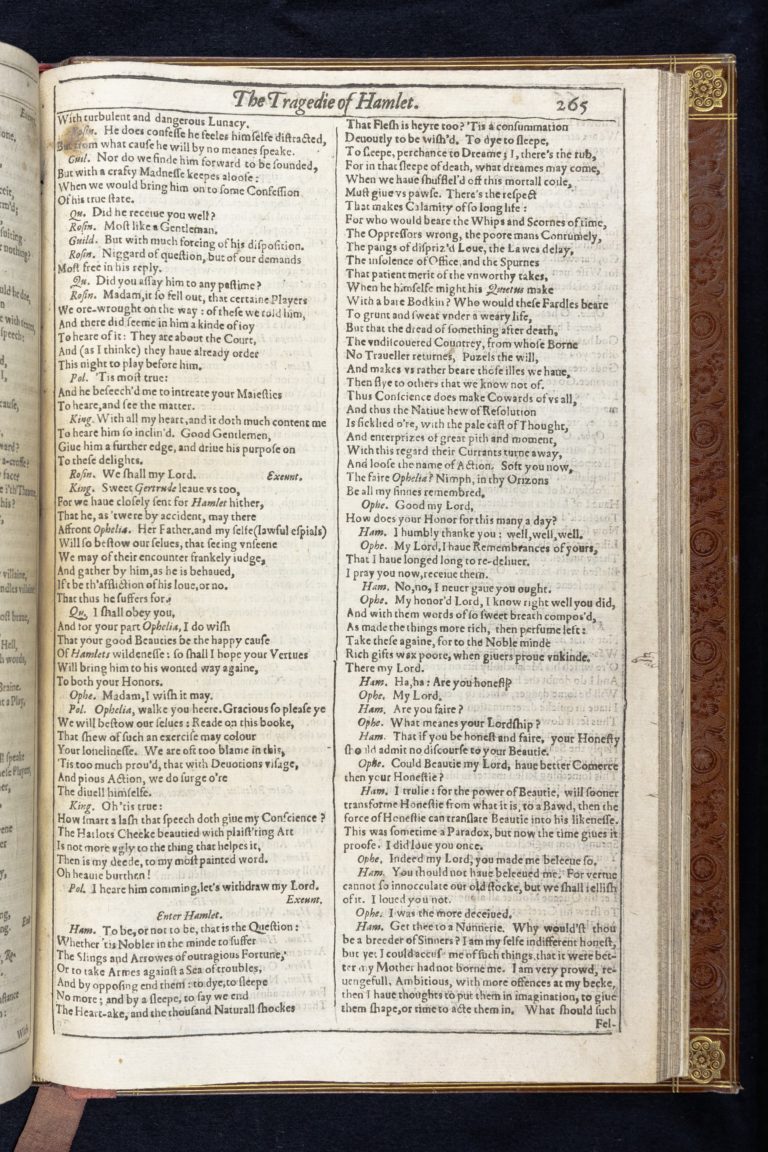 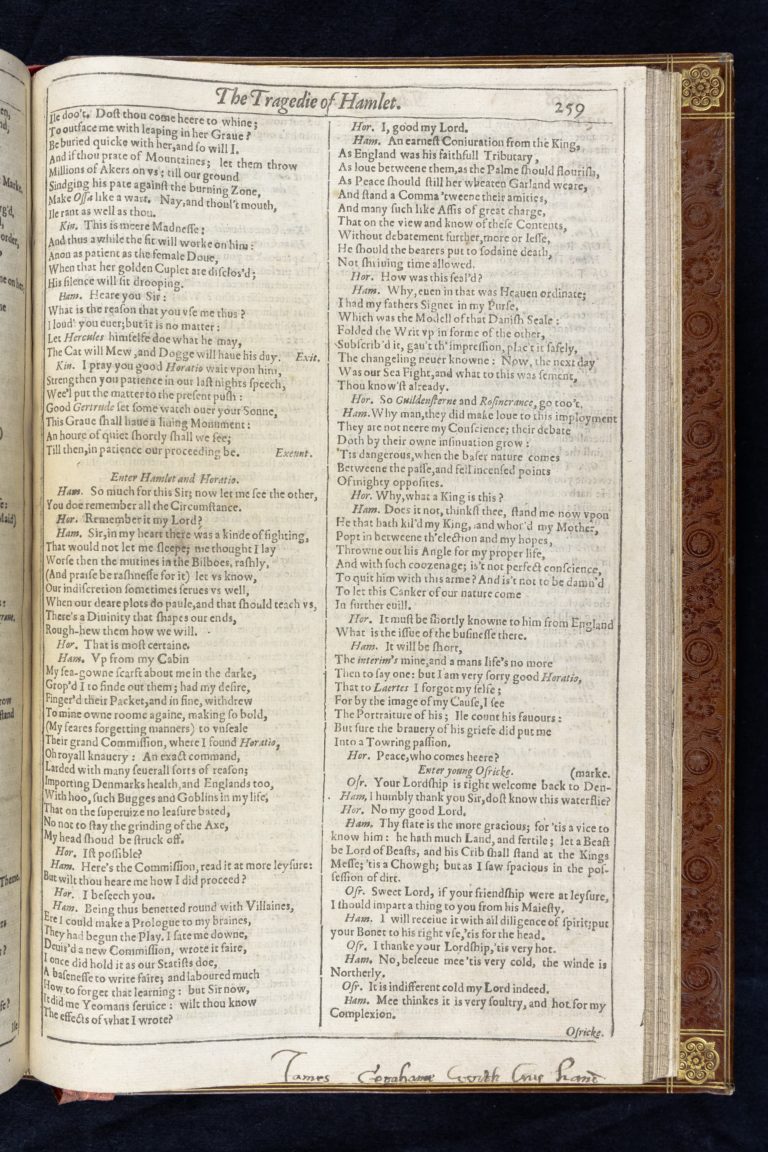 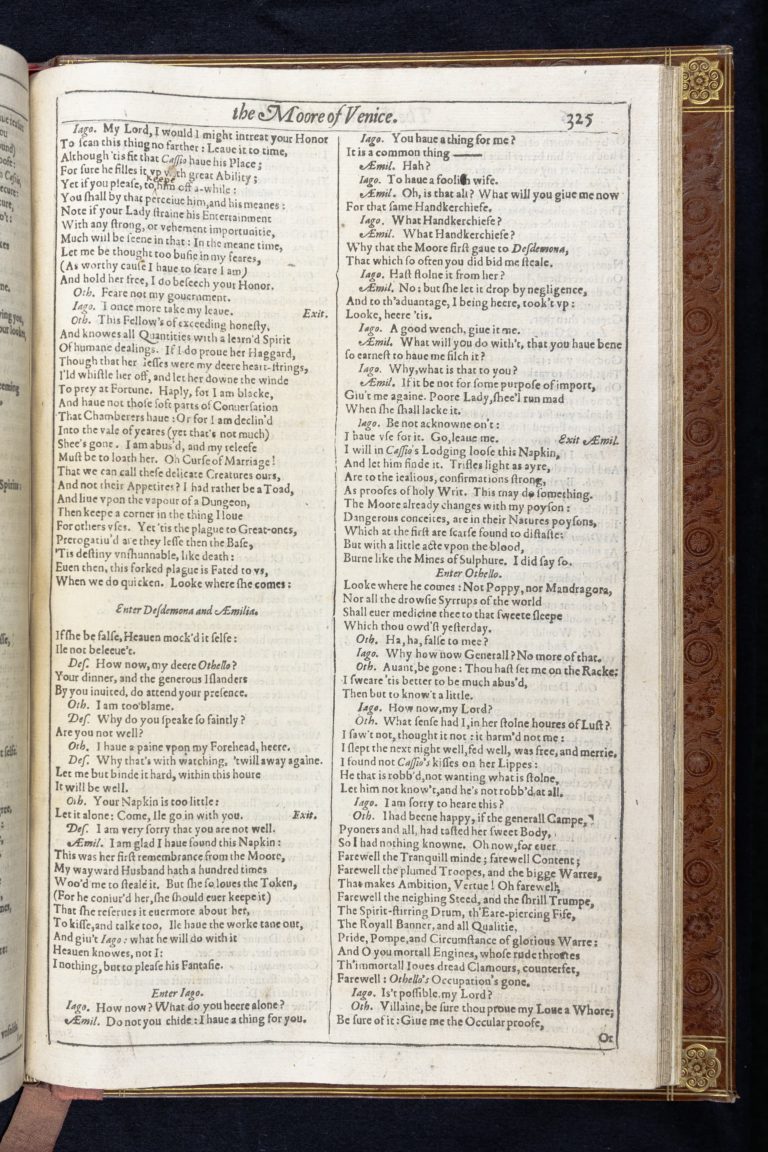 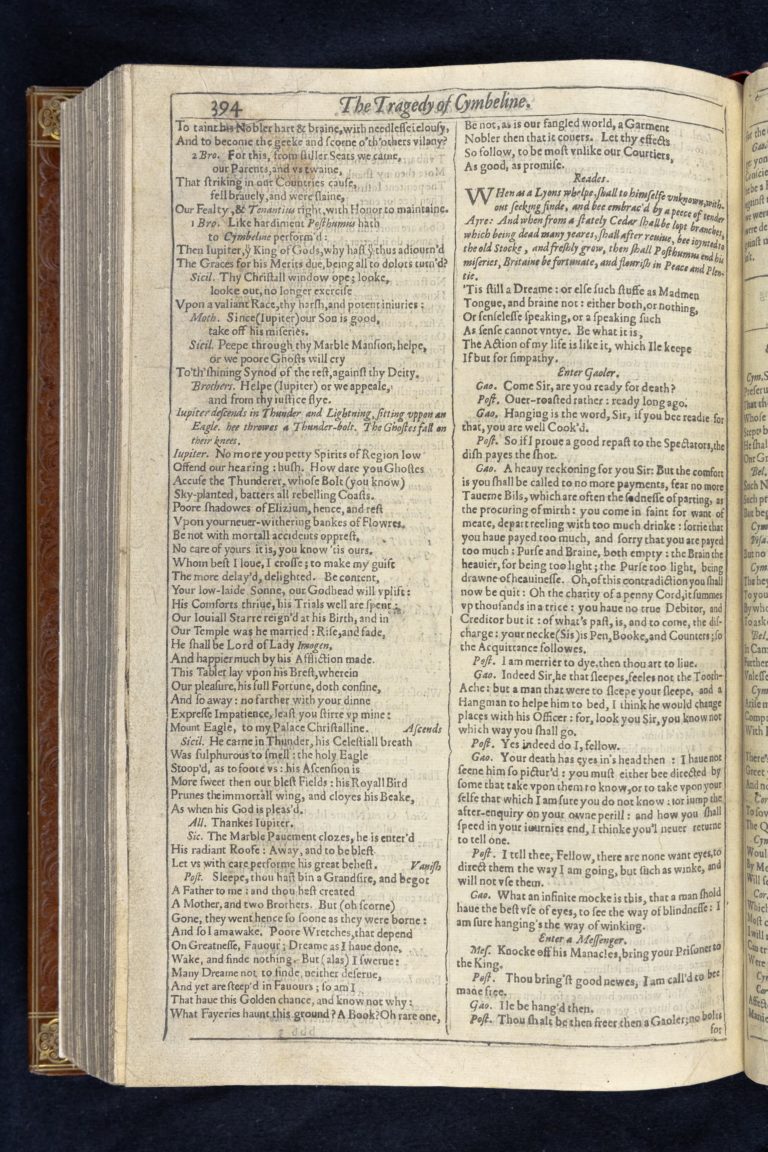 Seventeenth-century readers were encouraged to ransack their books for useful quotations, wisdom, or rhetorical flair. This activity, known as commonplacing, tended to prioritise decontextualized verbal snippets over plot or character, and many books from the period are marked up with a sense of what early readers noticed. There are relatively few marks like this in the Munro folio, but someone has drawn a lovely pointing finger – known as a manicule – to highlight Ophelia’s proverbial phrase ‘rich gifts wax poor, when givers prove unkind’, and there are other brackets, dots and underlinings that identify lines of particular interest. As in many other copies of this book, such readerly attention is very localised. Almost no-one seems to have worked systematically through the Folio’s nine hundred pages!

For modern readers the First Folio has accrued a monumental status (and pricetag). Without it, we would not have Shakespeare – because we would have lost half of his unpublished plays, including Twelfth Night, Macbeth and The Tempest, because we would not have a portrait of our author without the now-famous Droeshout engraving on the titlepage, and because there would have been no material archive preserving and solidifying his reputation for subsequent generations. The book is thus important but also rather distant: an icon rather than a familiar object, more suited to the museum or even the bank vault than the fireside or the theatre. Not so in the past. The Munro Folio shows lots of signs of convivial reading: some greasy stains that probably represent food, and some tiny burn holes that are clues to pipe-smoking.

If early readers were not too fastidious about this book, nor were they in awe of it. In this copy there are a handful of corrections to mistakes in the printed plays. In As You Like It, for instance, where two speeches from the loyal servant Adam run consecutively, one reader has realised that something is missing, and added, in neat brown ink, the speech prefix ‘Orl’ for Orlando. A reader has noticed a missing word in Iago’s line in Othello which reads ‘Yet if you please, to him off awhile’ and suggested that ‘keepe’ before ‘him’ would make better sense (modern editors here patch the text from the 1622 quarto edition, which has the word ‘hold’ at this point, but the impulse to correct is the same one). A mistaken duplication ‘to to’ in the Ghost’s speech about Gertrude in Hamlet has been crossed out. These scattered examples show readers’ willingness to improve the text where they see it to be lacking.

When Shakespeare’s fellow actors in the King’s Men, John Heminge and Henry Condell, gathered together the plays of their deceased colleague for publication, they seem to have wanted to distance the publication from the theatre, perhaps to push it upmarket. It’s a wonderful irony to have this book back in the playhouse world from which it originally drew its dynamic, lasting energy. 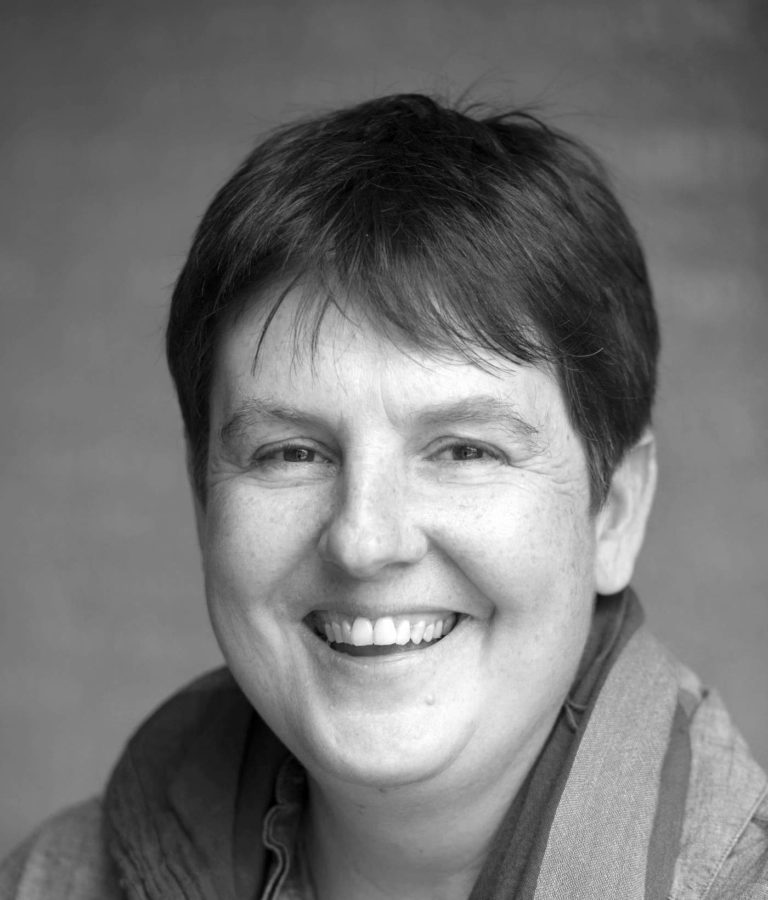 Emma Smith is Professor of Shakespeare Studies at the University of Oxford, and a Fellow at Hertford College.  Her books include The Making of Shakespeare’s First Folio: Four Centuries of an Iconic Book.